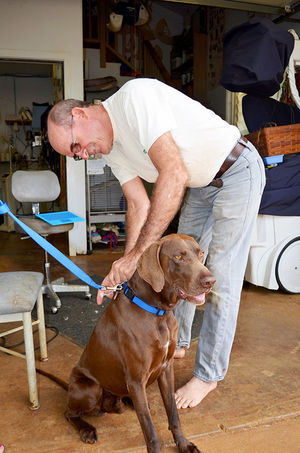 Kauai’s Own Dr. Scott Sims is the “Aloha Vet”

The idea of doing a reality show about the life of this popular Garden Island vet came about during a visit from an already famous Kaua’i resident, Laird Hamilton.

About a year ago professional surfer Laird Hamilton’s dog was mauled by a neighbor’s pit bull. Laird brought his dog to Dr. Sims. On a followup visit the next day, Hamilton was being followed by a professional film crew who noticed Dr. Sims’ bare feet and unconventional ways.

The film crew asked if they could come in and shoot some film, Sims said sure, in his easy going way and there was no turning back from there! A day later LA was calling and a year later we have the reality show – Aloha Vet.

“Sims said he and the crew had some great adventures together, from tagging sharks on Oahu to rescuing a sea turtle entangled in fishing line and saving an unconscious horse stuck in a river bed.